Before you can publish your service on Amazon or Google, you have to submit your app for review/certification. It means there’s a trial process where your app is being evaluated and tested to make sure it conforms to the platform’s standards.

Once the review process is finished, and your app is deemed satisfactory, you can take the next step and publish it live.

If you want to update the Live version, you can keep working on the app in the Development stage and finally publish that version to replace the previous one.

Submitting, publishing, and version updating the app for all platforms can be done directly from your Convoworks Editor.

Versions and releases in Editor 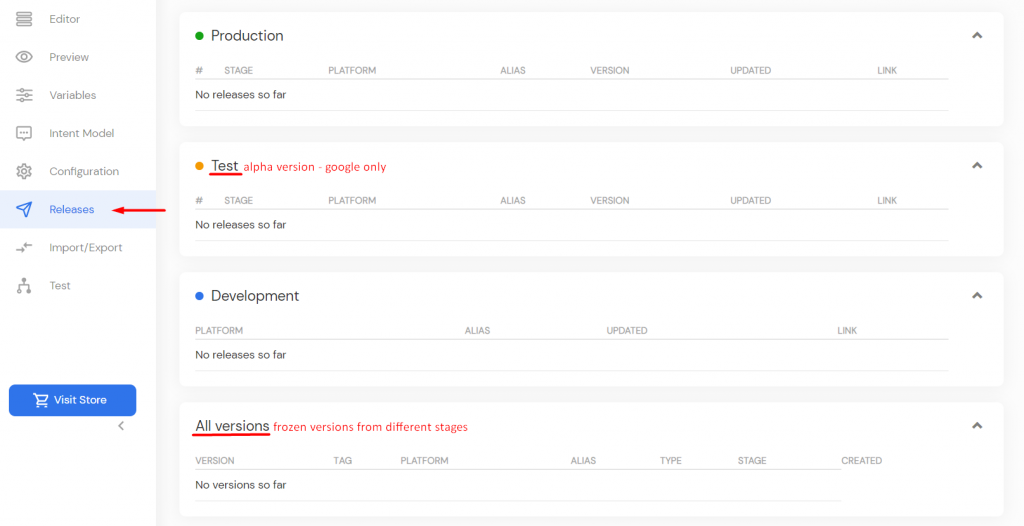 You can manage current versions and releases on the Releases panel of your Convoworks service page. You can find four sections there – Production, Test, Development, and All Versions – representing different versions of the service.

The Test section is intended only for Google’s alpha version. Google has an alpha and beta testing phase, while Amazon only has beta. The Beta phase is for testing before release, while the alpha precedes that.

Each time you create a new version, the endpoint URL automatically changes as well. Endpoint URLs change by the letters labled in the tables as Aliases. URLs can change from a, to b, or c, depending on the previous version’s letter.

For example, you want to submit for review a new version of your service. There’s already an Amazon’s version released in Production. The version from Development that you want to submit is b. You start by choosing the Submit to review option in the Development section. A new version now appears in the Production section – tagged with letter b and labeled as review in the Stage column. 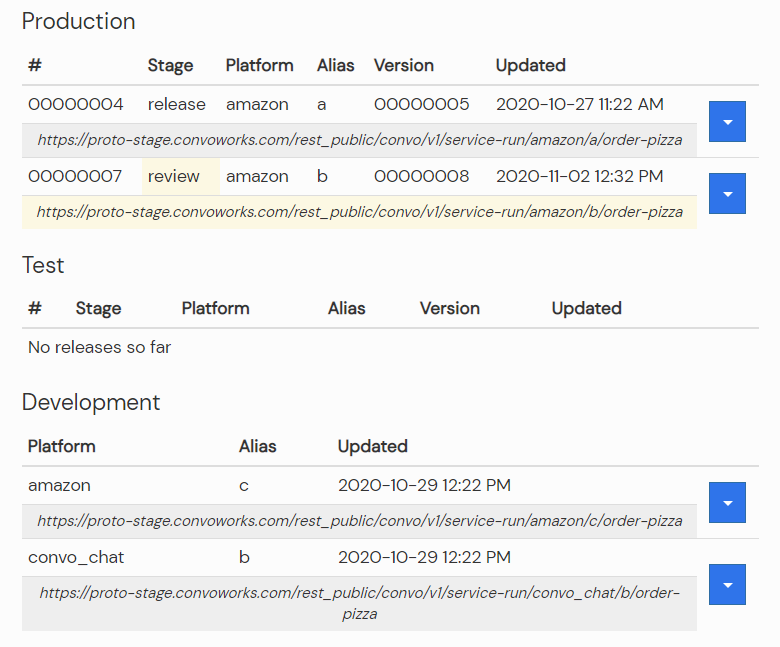 The Development version now switches to the letter a and you can continue working on it. In order for the version changes to take effect on the platforms, you must click the Propagate button.

Once version b is reviewed and approved, you can promote it to release in the Production section. The review version b will then replace the previous version c in the release stage.

You can freeze a version by yourself from the Development section by choosing Tag as simple version option and thus making it available in the All versions table under the chosen name.

Importing doesn’t change the version or the alias. You can even Import to release/review the version from Development to Production. However, there are some limitations. You cannot import to Production a version with the intent model changed. The app needs to be re-published, that is, the new version submitted for review.

Import to release/review is only for minor changes in the service – like improving text or logic. The intent model needs to remain intact.

And remember to always propagate the changes after you’re done.